Savanna Bunkett is an investigative reporter hell-bent to uncover the truth. When she digs into a rumor about a top secret government project producing “super soldiers”, she suddenly finds herself on an assassin’s hit list.

Navy SEAL Lieutenant Trace Hunter is the only soldier to survive Project 24. After refusing a direct order, he was branded a traitor, and his career was ruined after the sexy Savanna turned him into a national headline.

Now working undercover for Shadow Force International, Trace is ready to use his enhanced skills to fight for justice and protect the innocent, but his first assignment? Protect Savanna from the one man who wants them both dead.

Helping Savanna is the last thing Trace wants to do, but her unwavering determination to expose a dark truth matches his own. She's his one chance to set the record straight and he’s her only chance at survival. When their mutual enemy closes in, can they put the past behind them and trust each other? Even if it means losing their hearts in the process? Or will secrets, lies, and forbidden passions cost them everything? 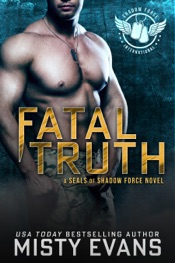